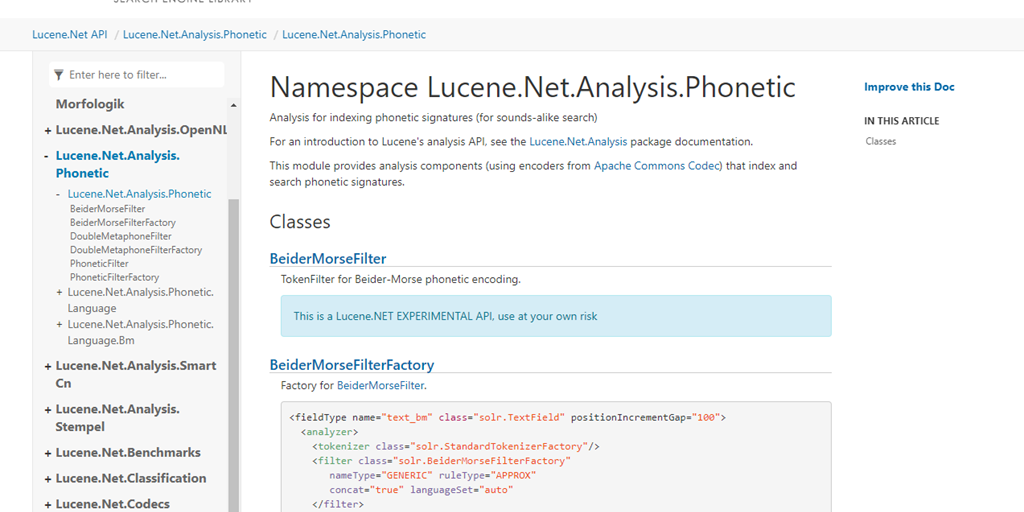 What is DocFx? It’s a static site generator mainly used for creating API documentation for your code. But it can be used for any static sites. We use this for the Lucene.Net project’s website and documentation. The end result is API docs that look and feel a little bit familiar, kind of like Microsoft’s own API documentation website. I’m not entirely sure if their docs are built with DocFx but I suspect it is but with some highly customized builds and plugins … but that’s just my own assumption.

Speaking of customizing DocFx, it is certainly possible. That said the ironic part about DocFx is that it’s own documentation is not great. One of the markdown customizations we needed for the Lucene.Net project was to add a customized note that some APIs are experimental. This tag is based on the converted Java Lucene docs and looks like: “@ lucene.experimental ”. So we wanted to detect that string and convert it to a nice looking note similar to the DocFx markdown note. Luckily there is some docs on how to do that although they’re not at all succinct but the example pretty much covers exactly what we wanted to do.

This example is a block level token since it exists on it’s own line and not within other text. This is also the example DocFx provides in it’s docs. It’s relatively easy to do:

This all uses MEF to wire everything up. You can see the Lucene.Net implementation of a custom markdown block token here: https://github.com/apache/lucenenet/tree/master/src/docs/LuceneDocsPlugins

The above was ‘easy’ because it’s more or less following the DocFx documentation example. So the next challenge is that I wanted to be able to render an Environment Variable value within the markdown… sounds easy enough? Well the code result is actually super simple but my journey to get there was absolutely not!

There’s zero documentation about customizing the markdown engine for inline markdown and there’s almost zero documentation in the codebase about what is going on too which makes things a little interesting. I tried following the same steps above for the block markdown token and realized in the code that it’s using a MarkdownBlockContext instance so I discovered there’s a MarkdownInlineContext so thought, we’ll just swap that out … but that doesn’t work. I tried inserting my inline rule at the beginning, end, middle, etc… of the DfmEngineBuilder.InlineInlineRules within my IDfmEngineCustomizer but nothing seemed to happen. Hrm. So I cloned the DocFx repo and started diving into the tests and breaking pointing, etc…

So here’s what I discovered:

Now that I know that, making this extension is super simple:

In the end, that’s actually pretty simple! But don’t go trying to create a fancy token that doesn’t start with those magic characters since it’s not going to work.