Articulate 4.3.0 with support for markdown code snippets and syntax highlighting 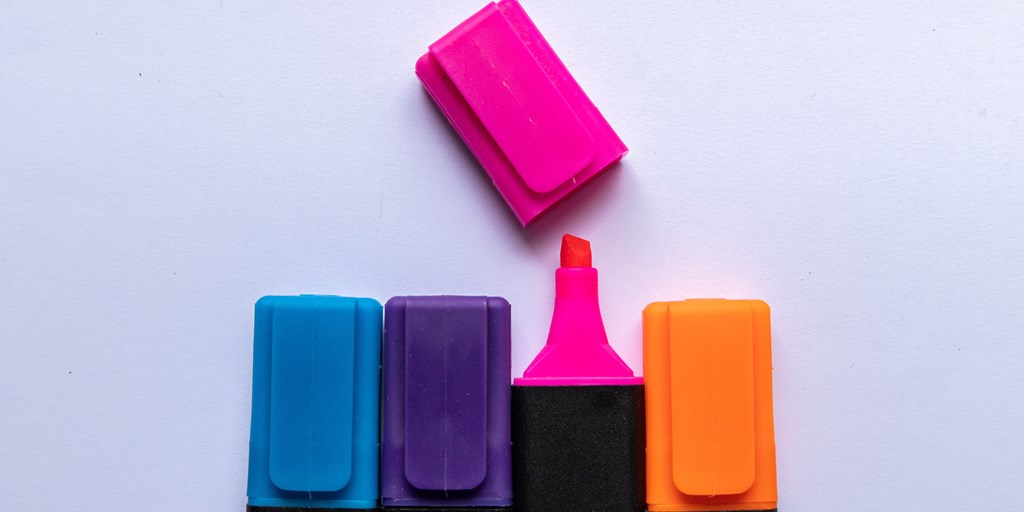 I'm happy to announce that Articulate 4.3.0 is shipped and includes a great new feature that I've been wanting/needing:

The ability to create markdown based posts with support for GitHub style code fences/snippets and syntax highlighting for (almost) any coding language. See #341.

Now I can finally do away with using Live Writer for my blog and having to manually add css classes to the html for syntax highlighting... yes that's what I've been doing 🤦‍♂️

You'll then need to update your Post.cshtml theme file to include the correct Prism dependencies. For example, here's the update/diff to the VAPOR theme which adds these dependencies. It's just ensuring that the Prism stylesheet is added to the header and the Prism.js dependencies are appended to the Post.cshtml file.

Once that's all done, your set!

Once it's loaded, it's just a text editor and you can use your all the normal markdown syntax. You can even upload or take photos with the editor 😀

Of course you can just use the back office markdown editor to create or update posts too but I find for quickly getting a post written and published it's faster to use the /a-new editor... and it works on mobile.

GitHub's documentation shows how this works. The typical code fence is 3x back-ticks above and below your code snippet. If you want to add language specific syntax highlighting you can use 3x back-ticks + the language name/alias. For example, c# would be: ```cs (or c# or csharp) and JavaScript would be ```js. GitHub's implementation is different from what Articulate uses so it may not be a perfect 1:1 result but should be fairly close. Articulate is using a combination of:

There are just rendered examples based on the default prism styles. I wrote this blog post with the Articulate markdown editor so you can see the results.

Here's an example of a rendered csharp code fence:

Here's an example of a rendered js code fence:

Here's an example of a rendered ruby code fence:

May 3, 2019 02:37
Tweet
If you enjoy my blog or any of my software projects please consider becoming a GitHub sponsor 💙💚💜 As little as $2/month goes a long way in helping me maintain these projects, their communities and this content.

It’s finally out in the wild! Articulate 4.0.0 is a pretty huge release so here’s the rundown…

As a developer, my recommendation is to install packages with Nuget

If you install from Nuget you will not automatically get the Articulate data structures installed because Nuget can’t talk to your live website/database so once you’ve installed the package and run your site, head over to the “Settings” section and you’ll see an “Articulate” dashboard there, click on the “Articulate Data Installer” tile and you’ll get all the data structures and a demo blog installed.

I have no official documentation or way of doing this right now 😉. I’ve written up some instructions on the GitHub release here but essentially it’s going to require you to do some investigations and manual updates yourselves. There’s very little schema changes and only small amount of model changes so it shouldn’t be too painful. Good luck!

(note: I have yet to give it a try myself)

I think it will come as no surprise that Articulate 4.0.0 is not compatible with any Umbraco v7 version. Articulate 4.0.0 requires a minimum of Umbraco 8.0.2. Moving forward I will only release more Articulate 3.x versions to support v7 based on community pull requests, my future efforts  will be solely focused on 4.x and above for Umbraco 8+.

There are several nice bug fixes in this release including a few PR sent in by the community – THANK YOU! 🤗

As for features, this is really all about updating the Themes. Previously Articulate shipped with 6 themes and all of them had a vast range of different features which I never really liked so I spent some time enhancing all of the ones I wanted to keep and made them look a bit prettier too. I’ve removed my own “Shazwazza” theme since it was way outdated to my own site here, plus I don’t really want other people to have the exact same site as me ;) But since that was the most feature rich theme I had to upgrade other ones. I also removed the old ugly Edictum them… pretty sure nobody used that one anyways.

I’ve also updated the default installation data to contain more than one blog post and an author profile so folks can see a better representation of the blog features on install. And I updated the default images and styling so it has a theme (which is Coffee ☕) and is less quirky (no more bloody rabbit or horse face photos 😛)

Here’s the breakdown of what they look like now…

This is the default theme installed, it is a very clean & simple theme. Originally created by Seth Lilly 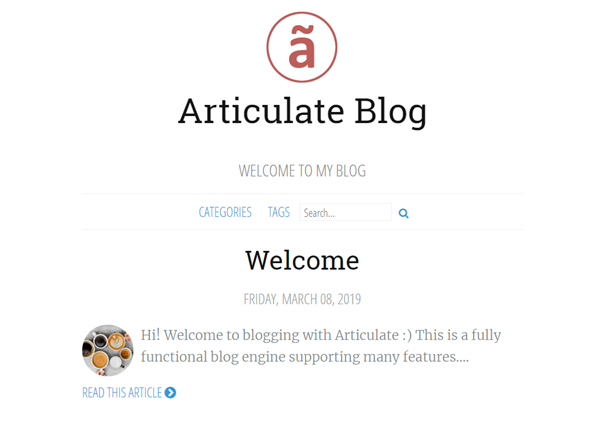 This is based of of Google's material design lite and is based off their their blog template. 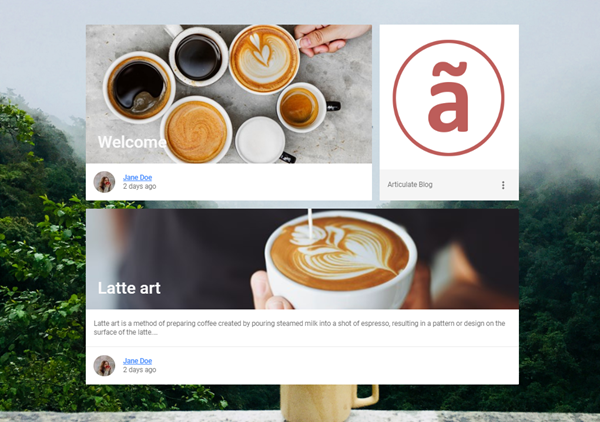 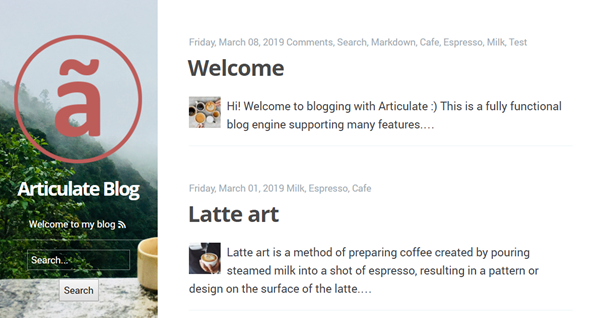 The original author's site can be found here: http://www.thyu.org/www/ but unfortunately their demo site for the Ghost theme is down. The theme's repository is here https://github.com/thyu/minighost. 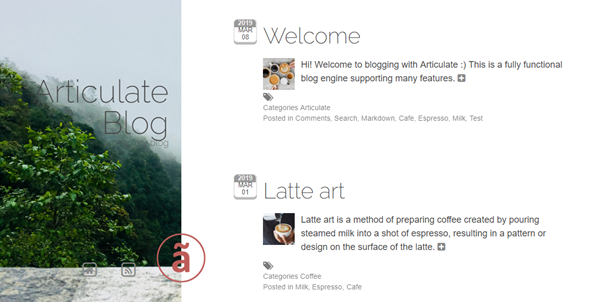 Hope you enjoy the updates!

December 5, 2014 03:02
Tweet
If you enjoy my blog or any of my software projects please consider becoming a GitHub sponsor 💙💚💜 As little as $2/month goes a long way in helping me maintain these projects, their communities and this content.

Today Articulate 1.0.5 has been released which has quite a few issues fixed, here’s the gist:

The GitHub release page is up and has the details and the package available for download: https://github.com/Shazwazza/Articulate/releases/tag/v1.0.5.1

The Our release page is also up with the package available for download: http://our.umbraco.org/projects/starter-kits/articulate

I’m sure you are already aware of this but if not it’s worth mentioning that Umbraco 7.2 has been released!! If you haven’t seen the details, it’s a huge and exciting release, full details are on the Umbraco blog

October 10, 2014 06:18
Tweet
If you enjoy my blog or any of my software projects please consider becoming a GitHub sponsor 💙💚💜 As little as $2/month goes a long way in helping me maintain these projects, their communities and this content.

I’ve finally got around to releasing Articulate 1.0.4 today. Want to say a big thanks to all those who submitted pull requests, you guys rock! There’s a few nice fixes in this release but most importantly it fixes the issues with multi-tenancy when domains are assigned in Umbraco.

Here’s the release notes on GitHub with links to each issue fixed:

You can download the Umbraco package from there or from Our here:

Unfortunately I haven’t got around to getting this on Nuget yet – That’s because it has it’s own challenges since I’d like to perform a full Umbraco data install via Nuget… coming soon I hope :)

This blog now powered by Articulate

June 26, 2014 04:14
Tweet
If you enjoy my blog or any of my software projects please consider becoming a GitHub sponsor 💙💚💜 As little as $2/month goes a long way in helping me maintain these projects, their communities and this content.

I’ve recently decided to build a new open source blog engine powered by Umbraco called Articulate. There’s a few reasons why i wanted to do this:

I’ve got some documentation written and I’ll keep updating this over time but hopefully there’s enough there to get you started. Since Articulate is open source and hosted on GitHub, any community contributions are hugely welcomed :) Whether that’s core code additions, fixes, documentation, etc… any contribution is a big help.

Articulate templates are based on themes and I think it would be super awesome if people started creating their own themes and releasing them as their own packages or including them in the Articulate core for release. Creating themes is really easy and in fact a few of the themes included with Articulate are open source MIT licensed themes migrated over from the Ghost blogging platform (which is also very easy to do).

The first version of Articulate is out and can be downloaded either from the Umbraco package repository or from GitHub. There are a few minor bugs in this release that have been reported and fixed and I’ll have a newer version out this week.